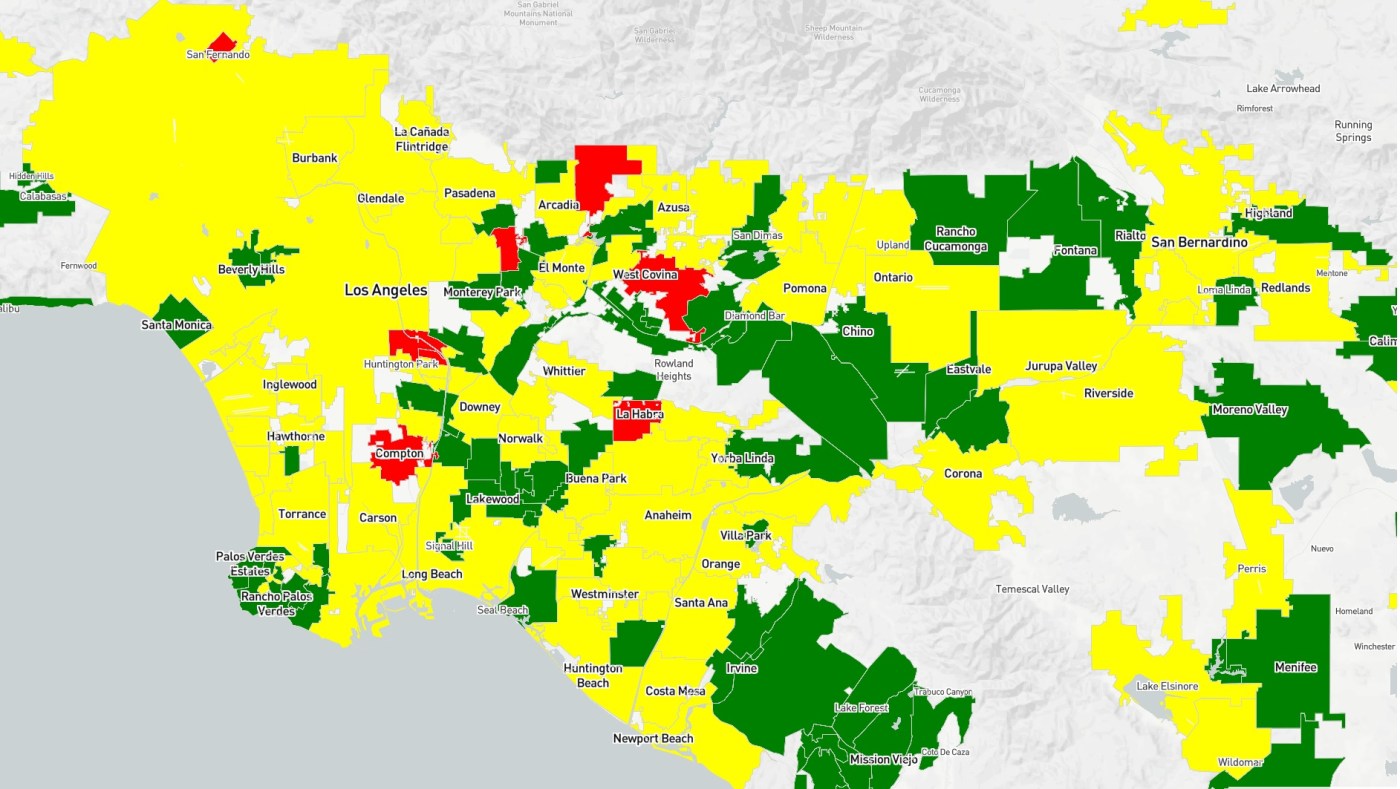 Years after our country emerged from the Great Recession, several Southern California cities have failed to prepare for the next downturn.

In October, California State Auditor Elaine Howle published fiscal health scores for 471 California cities. She found that many were ill-prepared to cover rising pension and other post-employment benefit expenses: a condition that would worsen if a new recession depresses tax revenues and decimates pension fund assets.

The state auditor assigned Compton the lowest score due to its lack of financial disclosure. The most recent audited financial statement on the city’s website is for the fiscal year that ended June 30, 2013. A 2014 audit was published but later retracted after the independent certified public accounting firm withdrew its opinion. Unfortunately, had Compton been able to produce more recent audited financials its score would likely still have been relatively low. Unaudited data that the city provides to the state controller shows  Compton has a negative general fund balance, which is roughly analogous to an overdraft on an individual’s checking account.

Several other cities in Los Angeles County ranked in the “high-risk” category because they’re “facing significant financial challenges.” These included (in rank order), San Fernando, San Gabriel, Maywood, Monrovia, Vernon, West Covina, and La Habra — with Victorville ranking just outside that high-risk category. Cities elsewhere in Southern California at risk of distress included Riverside, Fullerton and Santa Paula, which were among the 23 cities in the worst shape.

Some of these cities have previously received unwanted attention related to their poor fiscal management. Maywood, for example, was the subject of a 2016 audit report that cited the city council’s inadequate oversight on city operations and ongoing general fund deficits. Vernon has been previously singled out for having more public employees than residents. Victorville’s defaulted airport authority bonds became the subject of a Securities and Exchange Commission (SEC) complaint, but, more recently, the city caught up on missed interest and principal payments.

Many other Southern California cities performed relatively well. Larger Southern California cities in the upper half of the auditor’s ranking included Santa Clarita, Palmdale, Irvine, Fontana, Moreno Valley, and Oceanside. These cities tend to employ best practices, such as funding infrastructure through the budget rather than borrowing via bonds, writing and abiding by strong financial reserve and rainy-day policies, and encouraging businesses to relocate and remain in their communities.

The highest-ranking Southern California city in the state auditor’s survey was Lake Forest, with the fifth-best score overall. This midsized Orange County municipality has a strong general fund balance and minimal liabilities. Lake Forest also limits its other post-employment benefits by capping retiree health insurance subsidies at $115 per month. This contrasts with many other cities that pay the full health care premium, even for retirees who are receiving $100,000 or more in annual pension benefits.

The state auditor’s survey provides a huge service for California’s local governments and taxpayers, but there are many opportunities for improvement. Taxpayers and governments would benefit if the report’s coverage was extended to other types of local governments, including health care districts and fire protection districts — several of which are under severe fiscal distress and face high pension costs.

Also, for the website’s tools to effectively serve as an early warning system of fiscal distress, cities need to report data faster. The state auditor’s website was launched in October 2019 using data from audited financial statements for fiscal years ending in 2017. The delay is largely attributable to tardy financial filings on the part of some cities even though they are normally required to produce audited financial statements within nine months of the end of their fiscal year.

Adding to the reporting delay is the challenge of gathering the audited financial statements and retyping relevant values into the scoring model. State Sen. John Moorlach, R-Costa Mesa, tried to address this issue by introducing Senate Bill 598, which would have begun a transition toward “machine-readable” financial statements. Although SB598 unanimously passed both houses of the state legislature, Gov. Gavin Newsom vetoed it.

Nevertheless, the state auditor has given cities and taxpayers important new accountability tools. This effort should draw attention to both the best- and worst-performing city governments and allow best practices to be developed to improve the financial stability and efficiency of governments.

Marc Joffe is a policy analyst at Reason Foundation (www.reason.org).