Chargers have plenty of linebackers, but only so much playing time to go around – Orange County Register 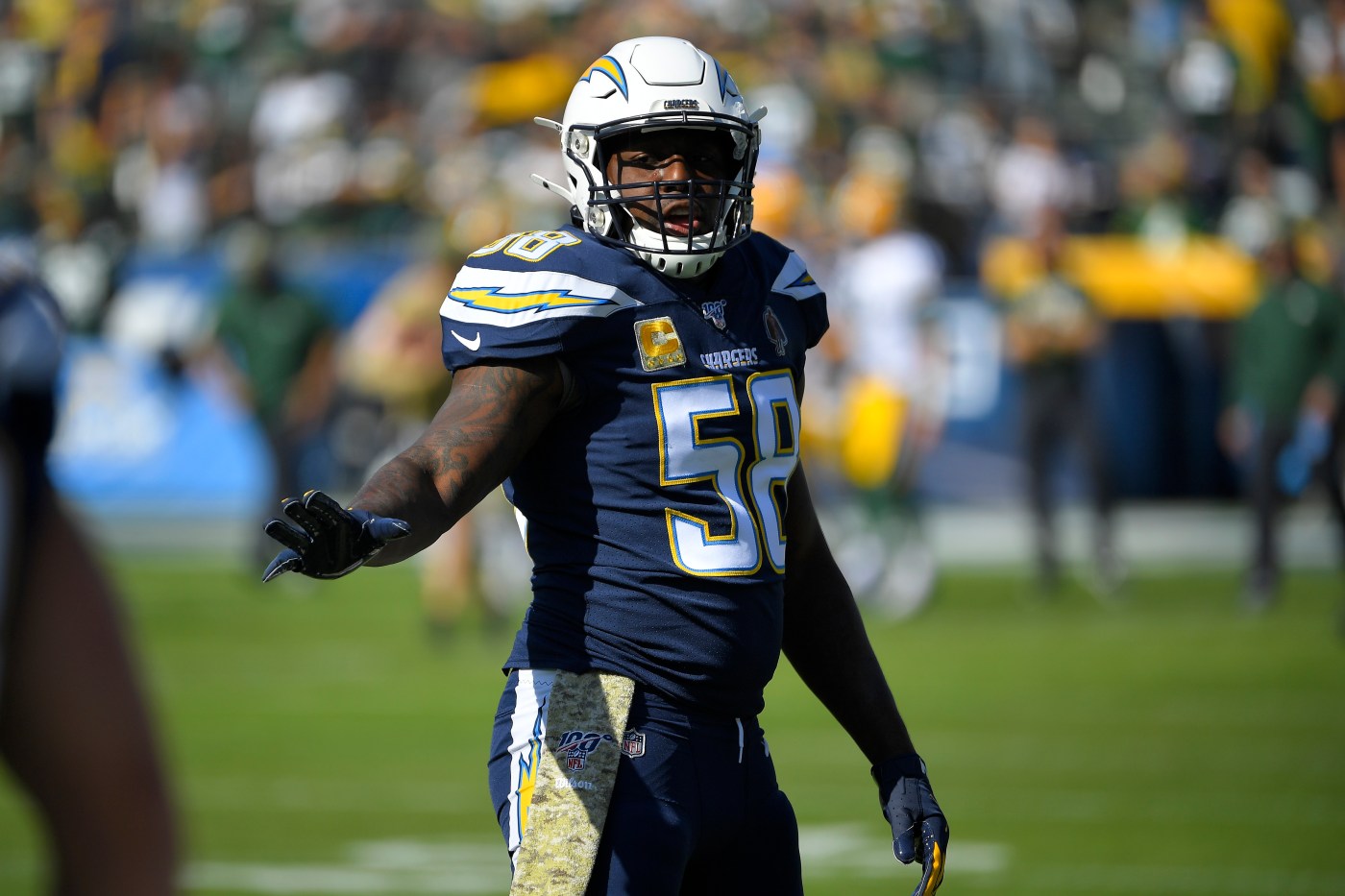 COSTA MESA — The Chargers stockpiled on linebackers in the offseason because they didn’t want injuries to severely deplete the position for a second consecutive season. Most of them made the 53-man roster after training camp, giving the Chargers a brewing dilemma in the regular season.

A few notable linebackers were going to be left out of the rotation. After 12 games, what was expected did occur, but in a strange way. There were more than a few odd men out.

It’s been a revolving door at linebacker. Besides 15-year veteran Thomas Davis starting every game at weakside linebacker and being on the field most of the game, the other linebackers have struggled to find consistency with limited snaps.

Overall, the linebacker unit has had a quiet season. That could explain why the Chargers only have 12 takeaways this season, tied for fourth lowest in the NFL. But the lack of takeaways certainly doesn’t all fall on the linebackers, and it’s hard to create turnovers with an inconsistent rotation.

With the Chargers playing five defensive backs for long stretches of games, there were already not enough snaps for the handful of linebackers. But Denzel Perryman was expected to play a lot at middle linebacker next to Davis, who joined the Chargers in free agency after 14 years with the Carolina Panthers. Perryman was slowed by ankle and knee injuries to start the season.

Perryman said he’s healthy now, and it showed when he intercepted a pass from Denver Broncos quarterback Drew Lock last week. But that was one of only 15 defensive snaps Perryman played in Denver.

Rookie Drue Tranquill started at middle linebacker last week, and has seen his snaps increase while Perryman’s have declined in the past month.

“I wouldn’t say it’s difficult,” Perryman said about the lack of snaps. “It can be if you start to get into a flow and the rotation just switches, but coaches do a good job if you’re in a flow. If you’re in a groove, they’ll let you stay in, if not — it is what it is. But at the end of the day, when my number is called, I just want to make a play.”

Perryman, who celebrated his 27th birthday Thursday, isn’t used to rationed playing time. He’s had season-ending injuries, but when healthy, he was known as the Chargers’ best run stopper since entering the league in 2015.

But the limited snaps haven’t stopped Perryman from helping Tranquill, and even Davis, who was new to Gus Bradley’s defensive system.

“You’re learning and teaching at the same time,” Perryman said. “With (Davis), you’re learning, but you can also teach him because he’s been in a different system for 14 years. It’s all a learning curve.

“Both of them guys have high motor. With (Davis), just his experience and knowledge of the game. It’s crazy. With Drue coming in and being a rookie, he understands football a lot. Both of those guys are a high motor guy.”

Davis was supposed to be the final piece of a championship-caliber defense when he signed a two-year contract in March. It didn’t transpire that way for the 4-8 Chargers, but he’s been durable and reliable with a team-high 96 total tackles. Defensive end Joey Bosa is a distant second with 51 total tackles.

Uchenna Nwosu is listed as a linebacker on the roster and was named the starting strongside linebacker in the offseason, but he’s also the third defensive end behind Bosa and Melvin Ingram. Regardless of what position he played, Nwosu was expected to be on the field often for his sophomore season.

Nwosu received a season-low two snaps last week, and has played less than 20 snaps in the past five games. Nwosu is viewed as one of the Chargers’ most promising defenders, making his lack of playing of time one of the biggest head-scratchers of the season.

“That’s a good question, but I don’t have an answer for it,” Nwosu said when asked why he received only two snaps against Denver. “You never know when my opportunities will come back, just gotta be prepared at all times.”

“(Defensive end) Isaac Rochell played a little bit more in that game, just based on what they were doing and how we were using Isaac and Uchenna. Isaac just came out with more snaps that game. Sometimes, that’s going to happen.

“I’m fine with Uchenna’s development, absolutely. When he has been given opportunities, he’s made plays I feel like. He plays hard. His effort is where it needs to be. He’s one of our core special teams players, so he’s helping us in other areas.”

With Nwosu playing in multiple areas, perhaps that’s making his usage more complicated than it has to be. Nwosu’s best plays of his young career have come as a pass rusher. Nwosu prefers to play defensive end, but that’s not his decision to make.

“I prefer to rush the passer because that’s where the money is,” Nwosu said. “That’s how you get paid in this league. That’s how you stay in this league for a long time. If you can get to the quarterback, you’ll always have a job, so that’s what I love to do. That’s my preference.”

There were also high hopes for second-year linebacker Kyzir White, but he hasn’t played more than 30 snaps in a game since Week 5 against the Broncos. He had an interception in that game.

The more-the-better approach didn’t work for the Chargers, but they have four games left to evaluate which linebackers will be around for the 2020 rotation.