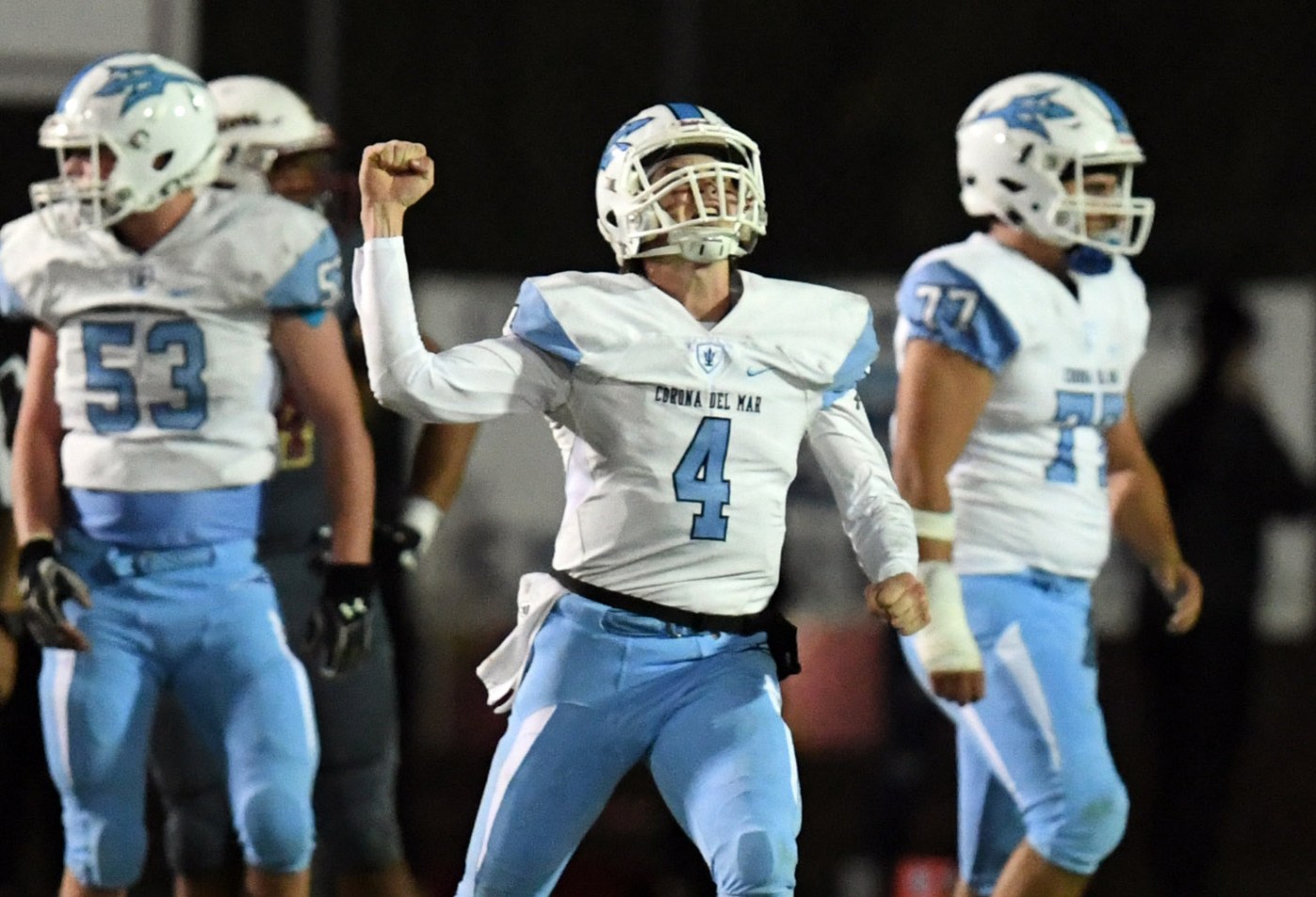 Corona del Mar will try complete another football season with a 16-0 record when it plays Serra of San Mateo in the CIF State Division 1-A Championship Game on Saturday.

The game is at Cerritos College at 4 p.m. It will be televised live by Spectrum News1.

Mission Viejo is the only other Orange County football team to have a 16-0 season, having done so in 2015.

Corona del Mar has a high-octane offense that is averaging 44 points a game. Senior quarterback Ethan Garbers, who is expected to sign a letter of intent Wednesday with Washington, has thrown for 4,779 yards with a completion percentage of 69.7. His 67 touchdown passes ties the O.C. and CIF-Southern Section single-season record held by Mater Dei’s JT Daniels (2016) and Western’s Anthony Munoz (2018).

Senior receiver John Humphreys, who is committed to Stanford, has 101 receptions for 1,916 yards and 31 touchdowns. The county single-season receptions record is 106 set by El Toro’s Dominic Collins in 2013.

The Sea Kings defense, which features seniors Chandler Fincher in the secondary and Mason Gecowets at linebacker, has allowed only 13 points a game. The defense was especially good last week in Corona del Mar’s 14-7 win over Oceanside in the Southern California Regional championship game.

Serra coach Patrick Walsh has been impressed by what he has seen of Corona del Mar during his preparation for the game.

“When I watch film of Corona del Mar,” Walsh said, “what I feel in my heart and what I see is what I want people to say about our program: a team that is disciplined and tough with players who play for one another and who are well-coached. All the things we teach around here are what’s happening at Corona del Mar.”

The respect is mutual.

“Serra is what we aspire to be,” said Corona del Mar coach Dan O’Shea. “Like Serra, we’re not the strongest or fastest team around, but we do put kids in good position to play above their speed and weight. When you watch them you can tell they’re exceptionally well-coached.”

Serra’s only loss this season was to St. Ignatius of San Francisco 14-13. Starting quarterback Daylin McLemore suffered a fractured collarbone in October but has improved enough to run the Padres’ scout team this week in practice. Sophomore Dominique Lampkin stepped in and has been a key reason Serra advanced to the state championship game.

Admission to championship games at Cerritos College is $15 for adults and $10 for senior citizens (65 and older), for students (with valid student identification) and for children. Parking is $10.

All of the games at Cerritos College will be televised live by Spectrum News1.