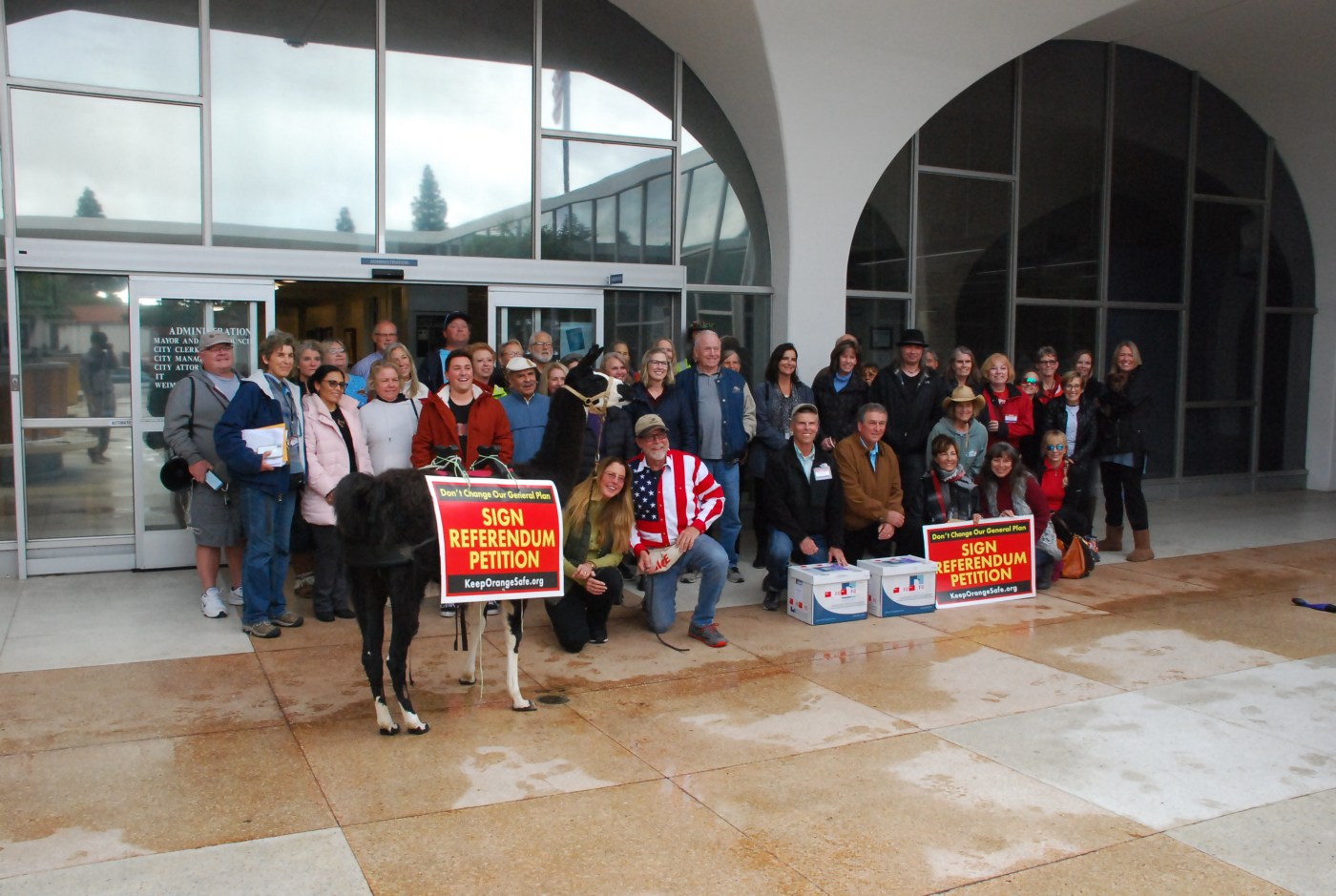 A group of 50 Orange residents, with a 4-year-old llama named Little Bear in tow, delivered more than 13,200 signatures to Orange City Hall on Wednesday, Dec. 4 in an effort to have voters decide on the future of a 128-home housing development off of Santiago Canyon Road.

City and county officials will spend weeks verifying those signatures – about 7,000 are required for the referendum to be on a future ballot. But the residents are confident they have enough to start the process of overturning Orange City Council’s Oct. 22 decision to approve The Trails at Santiago Creek at the former Sully-Miller quarry.

“When we start fighting, we don’t lose,” said Theresa Sears, an Orange Park Acres resident leading the effort for the referendum.

Many east Orange and Orange Park Acres residents are protesting the project, saying it could increase traffic and pose environmental risks — some of the project will be in a 500-year flood zone. The project also threatens their rural equestrian community, they said.

Little Bear has been serving as the residents’ mascot – standing next to the volunteers gathering signatures.

“He wants open space too,” east Orange resident Katrina Kirkeby said as she stood next to the llama.

But the developer’s representative, Frank Elfend, said the project provides open space. If the project gets built, Milan Capital Management is committing up to $4.1 million to improve 68 acres of the property that will be dedicated to open space, and another $1 million to enhance local trails. Homes would be built on the remaining 41 acres of the 109-acre property.

The developer also would sell the land formerly used as the Ridgeline Golf Course to the city for the fair market price, Elfend said, and the city would keep the property in east Orange as permanent open space.

“We believe the benefits are substantial and significant, and it will be our job that the citizens of Orange understand the benefits,” he said.

State law gives officials until mid-January to verify the signatures. Then, the City Council can either repeal its approval of the project or put the issue to the voters. The council could call for a special election, but Sears said it’s likely the referendum will be on the November general election ballot.

The last land-use referendum in Orange was in 2012, when voters struck down the council’s approval of a 39-home project on the Ridgeline Golf Course.