By Jeff Stearman in Home Buying Tips with 0 Comments 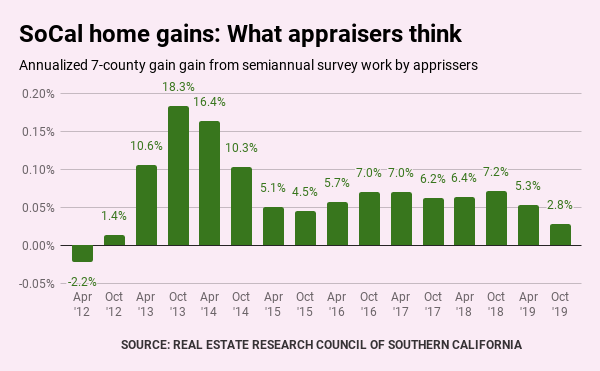 More evidence home appreciation is cooling: Orange County price gains are running at a seven-year low, according to one novel yardstick.

Home values in the county were appreciating at an annual rate of 1.5% in October, according to calculations by the Real Estate Research Council of Southern California. Since 1943, the group based at Cal Poly Pomona has tracked local home-value movements twice a year with volunteer appraisers re-evaluating a set of 308 single-family homes across seven Southern California counties.

The county ranked No. 6 among the region’s seven counties by this price-performance metric. And it’s the smallest appreciation increase since April 2012.

While the council uses a small sample, the consistency of the targeted homes eliminates one flaw in other transaction-based valuation benchmarks — the changing mix of homes selling. And don’t forget, appraisers can swing a market because their valuations are a key part of the mortgage-making process.

The council’s latest appraiser index for Orange County showed appreciation was running 77% below the 6.5% average since October 2012. The latest estimated gains also are below the 4.1% seen six months earlier and less than the 6.5% reported a year ago.

The council’s index for seven Southern California counties showed homes appreciating at an annual rate of 2.8% in October, compared with a 7.9% average since October 2012, 2.8% six months ago, and 7.2% a year ago.