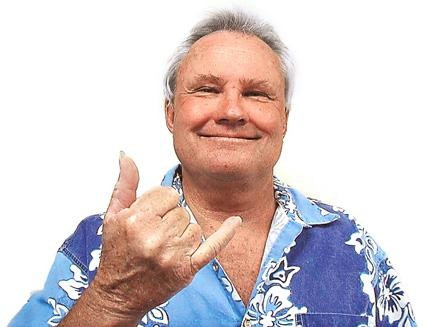 Hardly anybody is still surfing when they hit their 90th birthday. Even less are still hand-shaping quality and highly sought-after surfboards.

Bob “Ole” Olsen is doing both.

And the dude is not missing a beat, either. He is in great shape, healthy and moves like he is a young buck in his 40s or 50s. As an example, let me tell you about the last time I was with him.

It was at the Vintage Surf Auction in Honolulu a few years ago. They had invited a few special guests to the event, including Ole and me, and put us up in a hotel in Waikiki. On the day of the auction a van picked us up and took us to the arena where the auction was to be held. In the van were Greg Noll, Bob McTavish, Lance Carson, Ole and me. When we got to the arena and they opened the doors to the van, Ole jumped out and ran into the building while the rest of us sat there in amazement before trying to pry our old bones outta the van. Totally incredible man.

So Ole celebrated his 90th birthday on Nov. 28 at his home in Lahaina on the Hawaiian island of Maui. Probably had a surf session and shaped a board or two before cake. Although I doubt if he actually ate any cake — he is a devout “only eat green” guy. He pointed that out to me that day in the van when I commented on what great shape he was in and he commented on what great shape I was not in. Hey, I like cake.

Sign up for our Coast Lines newsletter, a weekly digest of news and features on how the residents of the SoCal coast are building ties to their changing environment. Subscribe here.

Ole started surfing in 1946, before even I was born. He started shaping surfboards in 1958 to augment his job as a wood shop teacher in Garden Grove.

One of the classic Ole stories was how he lost half of the first fingers on each hand. The first was when he was showing his students how to work a certain power tool in the wood shop class. Cut the thing right off just above the middle. On the anniversary of the day he made that error they gave him a “farewell to the finger” party at school in commemoration. Leaving campus he went to jump into his new VW van and noticed that one of the pop out windows was open and went to close it. Unfortunately for Ole, he accidentally had his first finger on the other hand in the window when he popped it closed. Cut the puppy right off in exactly the same spot as he did the other finger. Voila!!! A totally matched set.

I first met Ole when he opened his shop in an old Quonset hut in Sunset Beach in the early 1960s.  His shop manager was Timmy Dorsey, who would go on to become a world-class surfer, legendary lifeguard and is now my next-door neighbor all these years later.

One day Tim told me that Ole had been watching me surf and felt that I might have some potential. He offered me a “team deal” on a new board. The deal was that I could get free color, anything I wanted, if I ordered a new board. I was ecstatic, mostly over the term “team” I think. Within a short time, with the help of my dad and my paper route, I was riding my first “team” board. A red, white, and green Ole that looked like a big Mexican flag. (Note: More on the story of this board is in my new book “Not Done Yet.” Go to CorkysNotDoneYet.com to score a PDF copy.)

Ole moved his shop to Seal Beach, into a building on Bay Boulevard where my pal Scott Hoxeng lived upstairs. In 1962, Hobie Alter, of Hobie Surfboards, bought out Ole and began producing the Ole line. He hired Mickey Munoz to be the manager of the shop and Mickey recruited me to be a team rider, along with himself. It was kind of the kickoff to a long and very successful relationship with the Hobie company that is still going today.

After Ole made the deal with Hobie he decided to pack up and move to Maui. Hobie only used the Ole name for a couple of years and then Ole was free to start making his own line again. So he opened up in Lahaina and is still there shaping and surfing away as we speak. Each August they hold the “Ole Classic” surfing event over there and it’s one of the longest running, and most fun, surfing contests on the planet.

And so, with all that in mind, here’s to Bob “Ole” Olsen. A happy 90th birthday and we will be looking forward to number 100. (Jeez, that means I have to make it another 10 years and still be writing this column.)

Q. I have almost two weeks off work for the holidays this year and I want to go surfing. Can you recommend somewhere I might go that will have a good chance of waves and won’t cost me an arm and a leg?

A. The real key to your question lies in the “won’t cost me an arm and a leg” part. One of the major problems with traveling at this time of year is the cost. Airlines jack up the fares, hotels jack up the rates, car rentals are at a premium and just about any and every other way to charge you more money is in effect. Then you also have the fact that pretty much anywhere you go is going to be crowded because so many people take trips, especially to warm surf destinations.

Honestly, the best answer to your quest might be right here in your own front yard. Southern California has great surf at this time of year. With the exception of southern Orange County, which gets blocked by Catalina Island, and Malibu, because the swell has to wrap too far, pretty much the entire coast from the Mexican border to Point Conception is getting surf. Combine this with all the money you are gonna save on travel and voila! The perfect surf destination for the holidays just might be right here, Southern California.

This subject should be a significant thing, so that when

However, in the event you only want to be published,

You will need some practice to get good at essay writing, but the rewards

That is if you need to seek out help in https://www.affordable-papers.net/ custom research paper writing.

are definitely worth it.

then your main goal is to get published.

you submit it into the college, it will not get tossed out because you didn’t pay it adequately.

have to write the documents by themselves.